Directed by Jack Peter Mundy, and written by Sam Gurney 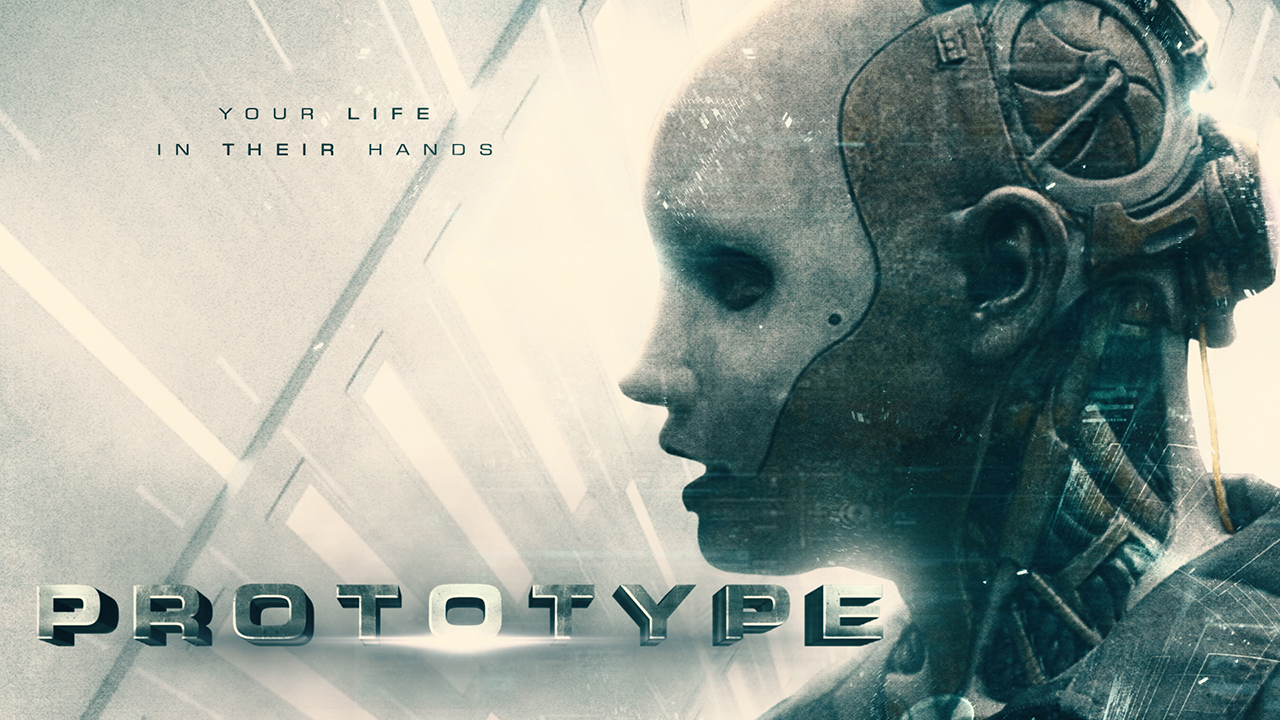 “Prototype” is a tech-thriller, a psychological drama, and fits neatly in the sub-genre horror category as a monster movie. Think “Frankenstein” (1931). Only the creature is AI instead of reanimated flesh and blood. Like many monster movies, “Prototype’s” theme questions the whole idea of what defines a monster. Even the tagline, “your life in their hands,” alludes to the fact that there’s more than one monster keeping Shelley Marshall (Danielle Scott) a prisoner in her home. The film takes place in the near future. Roger Marshall (James Robertson) and his partner Graham (Andrew Rolfe) design and build human-like androids to help around the house.

The first prototype, appropriately named One (Luke Robinson), is popular, but it has a few flaws.
First off, One’s relationship with his wife and daughter is a problem for Roger. There’s also the fact that One isn’t actually the very first prototype that Roger and Graham developed. However, what happened with the first prototype isn’t something Roger intends to discuss with investors.
Of course, there’s always room for improvement when it comes to technology. To that end, Roger and Graham develop another prototype, Two (Zoe Purdy). This prototype has higher machine intelligence and super-human abilities. It also seems to understand that it’s important for Roger to feel like he’s running the show. The thing is, Two has a bad attitude and no qualms about showing Roger’s family and any visitors snooping around who’s really the boss. Sometimes that means killing the people that piss it off. Other times, the android tells an inappropriate joke meant to intimidate the family. Not only that, it makes sure that One knows it’s only an appliance and points out, “I can do everything you can, but better.” As it turns out, the thing Two is better at is being ruthless. One is a loyal caregiver. Both of them seem to have more emotion than you’d expect from a machine, giving us the impression that they’ve advanced further than their creators know.

Director Jack Peter Mundy manufactures an atmosphere of apprehension with limited locations that feel claustrophobic at times. That’s a good thing from a horror perspective. We know Roger has Shelley trapped in this house for the most part. She can leave, but if he finds out, she’ll probably pay for what little independence she momentarily grabbed. Roger is abusive to an extreme. Why? Writer Sam Gurney never fully explains why Roger seems to get so much enjoyment from terrorizing his wife. He definitely has an anger management problem.

Mundy’s subtle use of background music maintains an underlying tension throughout the movie, as well. It’s a slow burn, however, without any real jump scares. If you’re a fan of blood and gore, “Prototype” might not tick that box completely. But it does have its moments, thanks to Two’s murderous attitude. Also, like any good horror film, we find ourselves tricked into getting pleasure out of certain characters getting their asses kicked. Mundy’s androids’ costume design leaves the actor’s eyes exposed underneath the mask. It makes it a harder buy-in for the audience to accept the illusion that the actors are androids and not human. Even a screen over that opened area or some colored makeup would have helped camouflage the skin. Here’s the thing. One’s face is reminiscent of Michael Myers’ mask in John Carpenter’s “Halloween” (1978), making Mundy’s android look like a monster. But Michael Myers’ eyes look hollow, giving that character an evil, paranormal feel. After all, the eyes are the windows to the soul.

Like its intelligence and attitude, Two’s face is a bit more refined. But it’s difficult to let go of the fact that you can see human eyes looking at you from behind the mask. The rest of the makeup and costume work pretty well. As it turns out, the headpieces do serve a purpose in the plot. Robinson and Purdy also do a good job of portraying believable characters. Their performances help us forgive any flaws we see in the mask design.

There are some pacing issues. For example, Two’s attitude escalates quickly, probably because writer Sam Gurney spends so much time developing One’s character arc. Still, the slow pacing gives the audience time to get to know the family whose fate is in the hands of artificial intelligence—and Roger. James Robertson as Roger gives us plenty of reason to hate him, from the sneer he almost always has on his face to his violent treatment of his wife. What’s more, he’s a role model to his son (Ben Reid), who will potentially become a man just like him. Overall, “Prototype” draws you in and gives you a reason to invest in the character’s fates. It fills the role of a monster movie, but it isn’t an adrenaline rush. Instead, the subtle soundtrack and atmospheric cinematography leave you with a feeling that’s more like general anxiety, holding you in place until the end.

The idea of artificial intelligence becoming sentient and threatening humanity isn’t a new concept. In fact, in 1921, Czech playwright Karel Capek coined the word robot (a Czech word defining forced labor) to describe artificial intelligence. Guess what? The robots in his play “R.U.R.” wreaked havoc too. Since then, writers and filmmakers from Asimov (“I, Robot” 1950) to Guzikowski (“Raised by Wolves” 2020) have explored our fear of a manufactured intelligence that becomes superior to humans.